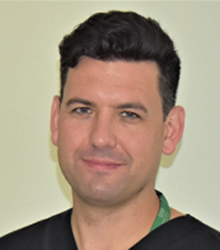 Consultant Chris Westall spent the pandemic working in critical care. The key learning for him was not in new clinical techniques, but in the importance of relationships.

We learned so much during Covid. We discovered how to use new equipment and new clinical techniques, such as how to best ventilate patients with Covid or novel therapeutics – and that learning was essential. But all that was Covid specific: it won’t change how we deliver intensive care. The learning that was of most value was about how organisations work and the importance of the relationships within them. What we learned about people, and how to organise them – that will change the way we work for ever.

I spent Wave 1 working as a consultant in critical care at the Broomfield site, time for all my other responsibilities was redirected to this, so I stopped all work in general and acute medicine. Beyond my direct clinical work, the only real responsibility I had was as the coordinator for the critical care junior doctors . So I turned up, looked after some patients, and managed the junior doctor rosters and redeployments on the side.

From clinician to clinical leader

But Covid had a way of highlighting weaknesses in the system and during Wave 1, our consultant team was blown apart. There had been longstanding problems with professional behaviours and interpersonal conflict that went back years, and the situation finally reached breaking point. One consultant was removed, another left the team as a consequence, and without warning I was appointed clinical lead for the critical care services at Broomfield Hospital.

Suddenly, it was my task to manage the wellbeing of the critical care unit at Broomfield, at this very challenging time. MSE was still operating as three distinct hospital sites, but by now, for the purposes of NHS England, we were seen as one cohesive organisation and the clinical director above me was tasked with bringing the three critical care units together.  We were working on this through 2020 alongside the Covid response. Then, in February 2021, he left. Once again, I found myself with another unexpected appointment – this time, as clinical director. So, in the space of 12 months I’d moved from jobbing consultant to clinical director of a much bigger, newly merged critical care directorate spanning three former hospital trusts.

Before the merger, the relationship between the three hospitals had been similar to that between any hospitals, anywhere in the country. There was no obligation to help each other out on a priority basis. After the merger, the expectation was that the three sites would support each other before reaching out to the wider network – there wasn’t yet any real working relationship between the three sites. Then the new operating model was introduced, reorganising the management positions, which reconfigured the existing relationships within sites, and everyone was moved around. It sometimes felt like no one knew who anybody was or what anybody was doing.

My first priority was to reassure and support our staff. With the merger going on, I had to be careful to control the messages that came down to the staff, to reduce decision fatigue and uncertainty. There was so much anxiety: we were facing the unknown. Would we be able to cope? What was the direct health threat to patients? And to staff? What about equipment – for example, if we got coronavirus in a ventilator, did we have to simply scrap the ventilator? (We now know this idea was ludicrous.)

A lot of my role involved being visible and having conversations with people: letting them unload or ask questions. We tried blogs, emails and remote working but it didn’t hit the spot. In the middle of Covid, human contact was pretty limited and staff just needed someone to talk to. Role modelling was important, too. Having a background in critical care helped, and myself and the matron rolled up our sleeves and got on with it. People needed to see us doing the best for our patients, while also fighting for their concerns at a higher level.

In some ways, healthcare staff aren’t complicated: when they’re asked to make changes, it’s a cliché, but you’ve just got to keep bringing things back to the patients. In Wave 3, hospitals were required to carry on doing our usual work as well as caring for Covid patients and we became so short staffed, nurses were being asked to break their ratios. This is a massive thing for an intensive care nurse: it causes them moral injury as it compromises the care they provide. The only way to keep the show on the road is to remind them there’s a greater purpose than just the patient in front of us.

For example, I might say ‘Down the corridor there’s a guy in his thirties who needs his cancer operation, and thanks to this change, he might now be able to live into his eighties.’ When people have that shared purpose and return to the values that brought them into healthcare, that’s when they start to pull together.

The communication between different wards and sites was really important, too. Twice a day we had Teams meetings with people across the three sites, including the clinical director of critical care, head of nursing, the matron or nurse in charge of the ICU, then various members of the senior leadership team for the overall trust. The more people attended, the more serious you knew the situation was. These meetings were for operational updates and were fairly formal, but they introduced us to people across different sites. Having met someone online, I was more likely to pick up the phone and ask someone’s opinion about something, informally. It was the start of critical care operating as a pan-Trust service. By wave 3, we knew what we were doing and these relationships were much stronger.

Covid has taught me that healthcare is a people industry. If you have good staff but no equipment, you can make a huge difference. If you have all the equipment in the world, you can’t do a thing without those good staff. And by ‘good’ staff, I mean staff who are motivated and highly trained. They are the thing that’s of greatest value to the Trust. That’s why we have to work so hard to keep our staff and invest in them.

That doesn’t have to be difficult: just giving people the time to follow their passions, to develop and improve their services, can make a big difference.

In some ways, Covid was like a forest fire. It purged a lot of dead wood. It accelerated a process that needed to happen, and it did it really quickly. Today, if I look at our consultants and nursing teams, there aren’t any significant interpersonal problems. There’s a healthy amount of disagreement, but it’s a cohesive service that’s moving in the same direction. We’re now making plans for the future of critical care: where we want to be in 18 months and what sort of service we aspire to be. Healthcare is never straightforward, and there are huge levels of trauma among our staff post Covid. But there are shoots of recovery. People are starting to feel more hopeful.